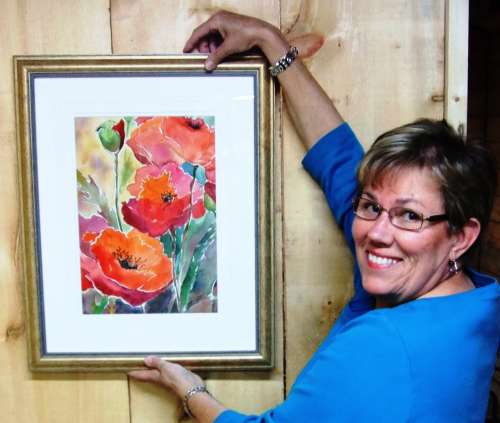 Stella Wadsworth was born in Leamington Ontario and moved to Bradford with her parents and brother at the age of three where she attended Bradford Public and High Schools. Following graduation from the Toronto General Hospital School of Nursing, she worked at Northwestern Hospital and then moved to Holland Landing with her young family. Stella took a nursing position at Southlake Regional Health Centre, then called York County Hospital. Stella worked in Obstetrics, which is now part of the Maternal Child Program, and then in the role of Patient Advocate at Southlake Regional Health Centre.

Retirement gave Stella the time to turn her interest in painting into reality. She started watercolour classes in the fall of 2003 and has since explored painting with acrylics, oils, mixed media as well as ink and wash. She has taken many workshops through her membership in the Society of York Region Artists, with Artists at the Gibson Group, at the Blue Mountain School of Landscape painting, at Fleming College, and with many other noted artists.

In 2006 she joined with 3 other fellow artists to form the Group of Four and hosted the first Art in the Barn show in Bradford. After three successful years of this event, Stella, with another local artist, co-founded Bradford West Gwillimbury Studio Tour held in September of 2009 and now in its’ 8th year. Stella has successfully entered juried and non-juried shows and won awards for her work. Her paintings are in private collections in Canada, Australia, Ireland and England.

Art in the Barn
291 Morris Rd
Bradford, On